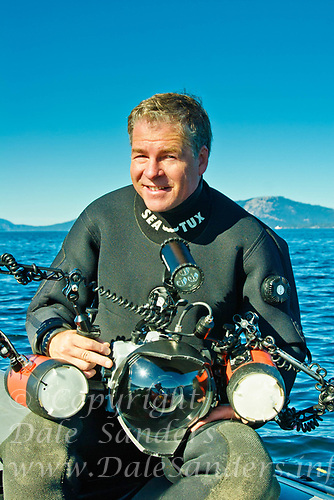 Dale Sanders is an award winning photographer, cinamatographer and writer based in the city of Victoria,  on the southern tip of Vancouver Island in British Columbia, Canada. He specializes in:  Underwater, Aerial, Marine, Travel, Sports, and Natural History filming. A Drone Pilot for over 7 years, Dale is certified by Transport Canada as an "Adanced RPAS / Drone Pilot" for Aerial Filming in Canada... and flies a DJI Phantom 4 PRO , with a Phantom 4 for backup.
He has enjoyed the rare privilege of swimming with wild dolphin and humpback whales, and has even had the somewhat dubious distinction of having a Great White Shark destroy the cage that he was taking refuge in! From diving the shipwrecks of Truk Lagoon and exploring the rainforests of Costa Rica, to hot air ballooning and rock climbing in the southwest; Dale has explored and photographed a wide variety of subjects worldwide!

But it is filming the incredible undersea world of British Columbia and Canada's Arctic that he has excelled at the most. Over twenty five years ago he produced a coffee table book on exploring British Columbia's rich underwater wilderness called "THE EMERALD SEA", that was awarded the distinction of being one of the three best books published in BC that year at the BC Book Prizes. And over the years he has had the pleasure of working on a dozen different documentaries that featured BC's giant pacific octopus... which just happens to be the largest octopus in the world.
In the past ten years Dale has spent nearly three months working in Canada's high arctic... filming Narwhals and Beluga Whales underwater off the ice flow edge on Baffin Island, as well as diving beneath two meters of arctic ice to document the amazing life dwelling in these frigid seas!